I wasn’t going to write anything about #SurvivingRKelly, but I changed my mind… sorta. I write this with hesitation.

The Black community’s continued support of this known monster is a no different from the way we blame girls and women for being victims, protect family members who display these same vile behaviors, and generally just stand in blind support of certain individuals in our community whether they deserve it or not. In summary, we have to find a cure for the communal disease of Sweeping Shit Under the Rug (SSUR). It has infected Black families since Jamestown, and continues to be one of the paramount reasons we protect abusers and leave the abused in a heap of pain and agony on the proverbial floor.

Much of the commentary I see, that isn’t strongly against all he stands for, either lessens his responsibility, disbelieves these Black women, or diminishes his behavior in an attempt to justify people’s continued support of this monster. It’s both disappointing and scary.

According to the Women of Color Abuse Network, over 60% of Black girls are sexually assaulted/abused prior to age 18. Numbers are lacking on the percentage of Black boys who face these atrocities, but based on the testimonies of Terry Crews, Chris Brown, Lil Wayne, ASAP Rocky, Tyler Perry, Kelly himself, and a host of other Black men, it is a common occurrence that needs more light shed upon it. Abusers who target children, typically target those in their circle. But this man set up a very intricate system of support to play out these atrocities on Black girl children. Without negating the very real trauma he obviously experienced as a young boy, we can still hold him responsible for his disgusting and vile behavior. The point at which you are putting a barrier of support around you to abuse and manipulate with ease, you are clearly aware that your behavior is wrong, criminal, and inhumane.

Let us not forget: this man taped himself in his own home urinating on and engaging in sex acts with a 14 year child. There is no excuse under the Heavens that will suffice. Not one.

Yet I know much of the support for him rests upon the fact that the majority of his victims were Black girls. Black girls and women are not deemed as believable. In our own community we are

1) seen as “fast” if we attract male attention or are naturally developed at a young age,

2)disliked and distrusted by each other, and

3) not the source but definitely the heir to the dominant role in both familial and professional areas by societal weakening/imprisonment of the Black male, which makes us enemy to many Black men.

We are still seen primarily as sexual objects both inter- and intra- race, and our intersectionality makes us susceptible to both the negative sexual connotations of race (Black people as sexually irresponsible and deviant) and sex (women as sexually manipulative). Therefore Black women tend to distrust other Black women, because of some real or imagined competition for the admiration and attention of men. Paired with the belief that Black men are sexually deviant, their husbands, boyfriends, fathers, brothers, and sons are deemed easily manipulated by other Black women. Similarly, Black Men tend to disbelieve Black women because of the patriarchal idea that we have taken their spot as leader. Many want to knock us down a peg or two, and use sex to do that… while simultaneously being sexually attracted to us and interpreting that as us manipulating and subjugating them sexually. So it’s par for the course for the community to assume young Black girls wanted it, knew what they were doing, and set out to accomplish their professional goals via sex.

Outside of our community, no one believes us because we are invisible to them… we aren’t male and we aren’t White, so we are valueless in their eyes. You can’t even hear the words of someone whose life doesn’t have value to you. 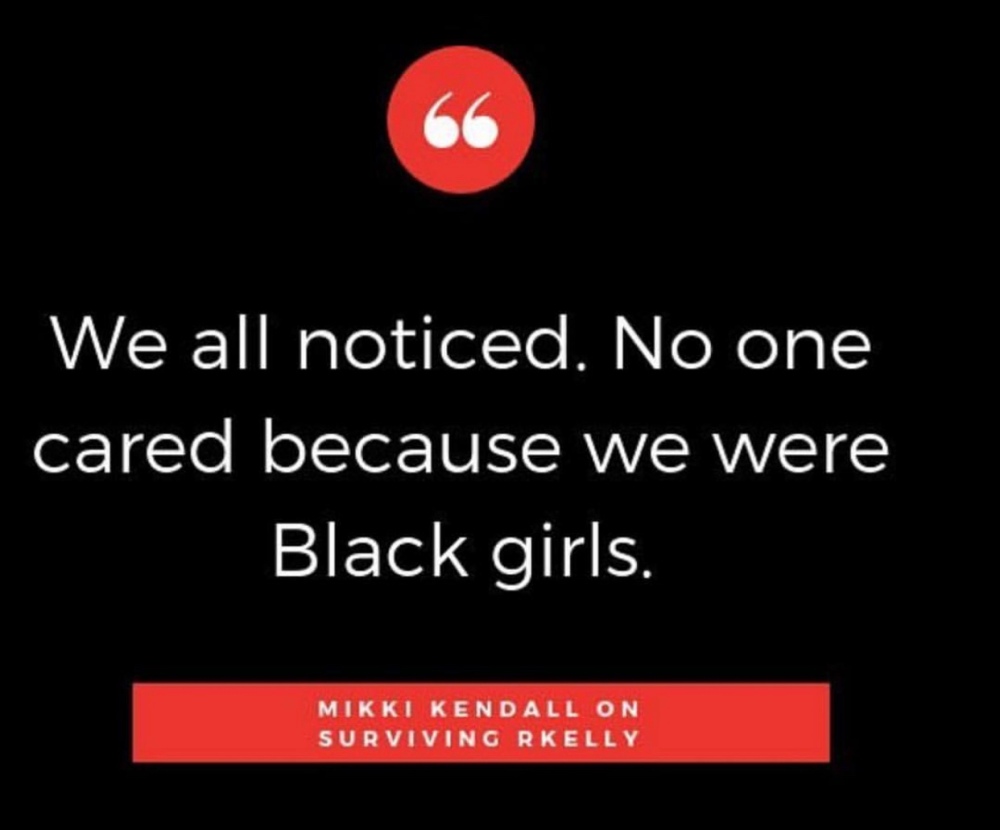 Every adult who knew about this belongs in jail. Every adult he showed those videos to, who watched and did nothing, are guilty. Every staff member in his homes and studio who allowed this. The tour manager that knew he was having sex with his 15 year old protege, he is guilty. The parents who allowed their underage children to be alone with him even after all of these allegations, tapes, and trials, they too are guilty.

They are just as guilty as the family who refuses to address Uncle Jerome who asked the 8 year old to sit on his lap so she could feel his hard on. Just as guilty as the mom who gets angry at her teenage daughter because her new boyfriend expresses more interest in her daughter than her. The effects of SSUR are widespread. Rooted in the tradition of protecting our own from the rest of society, but missing the very important understanding that those protections should only be given to those of us who uphold humanity while being caught in the crossfire of racism, prejudice, sexism, and subjugation. But criminal sexual behavior against minors… he should be swept under the jail.

We must stop protecting these monsters, no matter who they are. Male or female. Family or not. Rich or poor. Brother, sister, cousin, neighbor, pastor, mother, father, teacher, and even wealthy men using their wealth as power as a tool of manipulation. But this story is sick and perverted on levels I can’t fully explain in words and can’t fully wrap my head around. He woos young girls and immediately institutes his system of sexual and physical control over them. He preys on their underdeveloped emotions. He starts a cycle of abuse that they ultimately believe they deserve or is indicative of love from this man. He uses his story of abuse to bring the young girls who have suffered abuse closer to him. He then records their encounters both visually and in written form in the form of song. It now makes sense why so much of his music, especially after the trial was fraught with stories of sex that seemed degrading and debased. But it makes sense now… these were his sexual memoirs. Sex in the kitchen by the buttered rolls on her tippy toes… what a sick bastard. Yep, those are real lyrics to a real song.

Fuck R. Kelly. He needs to be separated from humanity, and then he needs intense therapy. But fuck him for ruining the lives of so many of our young girls.