“Morality cannot be legislated, but behavior can be regulated. Judicial decrees may not change the heart, but they can restrain the heartless.”-Dr Martin Luther King Jr

This is a personal story. I share it in the spirit of necessity.

The other day I watched a video that disturbed me greatly, a group of young white men taunting and disrespecting a Native American man displaying his culture through singing and playing of the ceremonial drum during the Indigenous Peoples March. It sickened me to watch it, but it simply reminded me of what I already know… we have to expose hateful behavior, give it a name, speak up and out about it, and then do something. Otherwise it just continues, and people feel comfortable and justified in their hatred. Doesn’t he look comfortable: 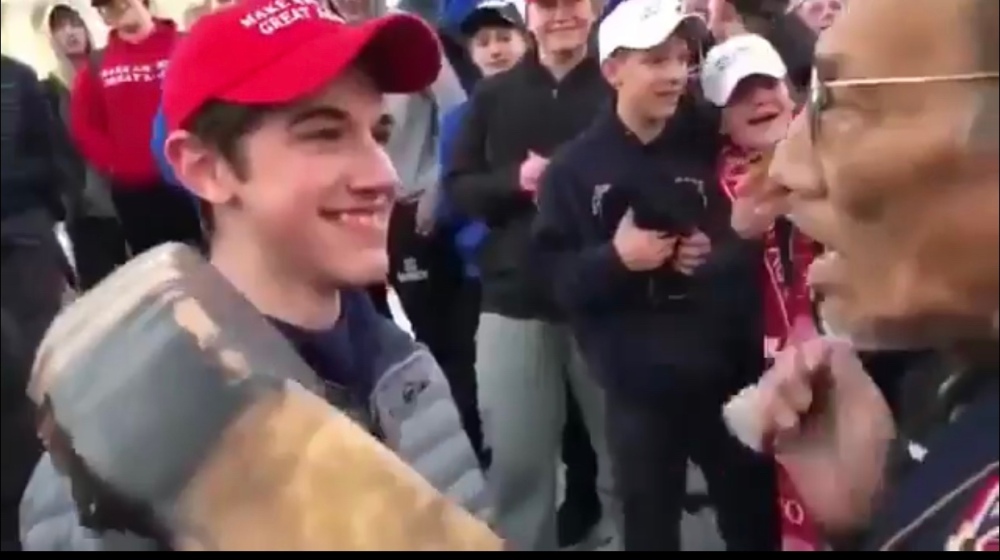 The place where you made your stand never mattered. Only that you were there… and still on your feet. -Stephen King

So in that spirit, here’s my exposé.

I work for the government. I have been subjected to sex and race based discrimination by both White, Black, and Hispanic managers and supervisors, and watched other people of color come under the same treatment for the last five years. These actions have been reported up the chain to no resolve. Employees are often pinned with bogus misconduct charges to blackmail them into holding their tongue, under threat to their employment, before they ever seek justice for their mistreatment.

Employees of color, a certain sex, and/or a certain age are accused of failing to abide by rules that no one else is held to and that stretch the letter of the policy so far it’s unrecognizable. Then they are denied the right to apply a policy that affords them certain rights. I have watched my melanated coworkers marched out, cardboard box and coccyx pillow in hand like they were going to the guillotine. Everything from racially motivated jokes, ignoring the complaints of employees of color with historical and real time data of discrimination, and sweeping blatant racism under the proverbial, Oriental, and flokati rug. All three… an attempt to hide their hand after throwing stones.

I have personally been harassed by Pennywise, purple instead of red donning the post ear (yep, you read that right) regions of her head. I’m ready to POP at any time, when she so much as looks or breathes my way. 🎈I have watched her, over the years, ingratiate women of color as if she’s invested in their success, then attempt to pull them into her personal sewer of insecurity. Only to take some perverse pleasure in harassing you when you refuse to fall down her rabbit hole. There are no finger sandwiches and funny dressed rabbits in her version.

I have a history of exposing their racism. They implement rules that are discriminatory in practice and have a disparate impact on people regarding a protected class, for example parents or individuals with caregiving responsibilities. A once gliding schedule until 9:00am taken away for only a portion of the workers, a group made up of mostly women of childbearing age with school aged children. I mean could you be any more obvious? They dole out punishments related to policies they fail to enforce or use until they can be used ala Jim Crow. They are a ridiculous bunch that doesn’t hide their dislike of anyone non-White and non-male or their reverence of White males.

This establishment that I pay taxes to help run, is run by people who disrespect me because I’m a Black woman. Then they punish and attempt to silence me because I’m a highly educated Black woman who is respected by my peers, smarter than them, opinionated, and unafraid to use my voice and my brain. This establishment whose important work I do, only wants to see faces that look like mine in the lowest levels of its hierarchy. This establishment created to ensure the rights and protections of its citizens, constantly breaks the law and chips away at my rights. I was born here, my ancestors tilled this soil and fed their great great great grandfathers, likely from their own bosom. But as I do work on behalf of my fellow citizens, I am treated like the same “alien” they label those who come to this country seeking protection and opportunity. I don’t know what life form you have to be to mistreat people and feast on their ability to take care if their families… but human they are not. This establishment was never created to protect someone like me, but since I am here, I refuse to be silenced.

Like Uncle Luke, I’m 2 Live, 2 Black, and 2 Strong to sit idly by as these people choose to use their titles to terrorize people.

Seriously though, I choose to use my voice to expose this behavior and ensure others don’t have to be professionally derailed, even temporarily, to feed the egos of the heartless. On this day, that we celebrate the life and legacy of the great Dr. Martin Luther King Jr., I choose to celebrate by using my voice and my words to do my part to change my little pocket of the world. My voice and my words are my freedom. Find yours, and use them to help free others.

Our lives begin to end the day we become silent about things that matter. -Dr.King