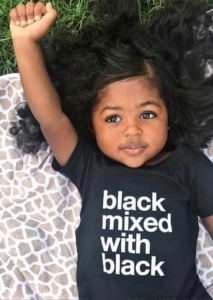 I love this line, cuz people have assumed my whole life that I got it easy cuz I could check several boxes on the race question and no one would question it… but the only thing I claim is the only thing I am… Black.

I got two Black ass Afro wearing Black power fist raising parents. My mama dropped me off at high school bumping Ice Cube… my mama. We had Black ass records in the house… Miles Davis, Coltrane, Aretha, the Isleys, and brown Michael Jackson, and Prince before the Just for Me relaxer. We had Black ass food… franks and beans, tuna and peas, hot water cornbread and fried chicken, black eyed peas and greens, cabbage and corned beef, and that big ass yellow block of cheese on occasion. We had Black ass books… My mama had Soul on Ice on the bookshelf and my granddad had The Miseducation of the Negro, the two I remembered most, among the other Baldwin, Lorde, Giovanni, and Black Panther penned books. We went to Black ass places, Eastland, the African World Fest at Hart Plaza, and Shrine of the Black Madonna. I know nothing else, but who and what I am. My folks were educated and had good jobs and demanded I be well educated; that’s not unique to White people. We once had wealth in our communities. During segregation we were forced to do business with one another and create our own communities of necessity. We have been going to college, been doctors and lawyers. We have been marrying across the spectrum… Loving v. Virginia in 1967 was almost 100 years after Kinney v. Virginia in 1878 which held their interracial marriage in Washington, where it was legal in 1874, as a violation of Virginia law. So all of this “ain’t Black enough” shit is garbage.

Somewhere between the Middle Passage and Emancipation, we lost who we were. Although we had escaped slavery, because we weren’t just freed it was definitely a freedom mission, we were still mentally enslaved. Black people were never afforded these unalienable rights and liberties; “we the people” didn’t include us. We have been forever entangled in a web of racism so tough that the simple ratification of an amendment could put us right back into chattels. We were robbed of our history, not allowed to read or write, so we only knew we were slaves. We were were actually descendants of royalty. Our ancestors created mathematics, language, and science. Egyptians from gold to blackened brass hues, taught the masters of philosophy and deeper thought, ideology, math, science, and sociology. It’s hard to love yourself when you have only been told you were valueless, so in the nature of humans who despise themselves, we turned on each other. But regardless of where we toil, we are still Black. I’m still a Slave in the house… with no rights, no control, and easier access by the massa to the bloom under my bloomers. “House nigga, field nigga…still nigga.” And yet, after educating ourselves to the highest degree, we still are mentally enslaved. Now that we know who we really are, instead of fighting against one another, we need to rise up against theses racists who impregnated our minds with self-hate and colorism… and take our power back. We need to stop this Black enough rating system that we base on shit that doesn’t matter… I’m Black enough if I’m Black, I support Black people, I’m proud of my Blackness, and I identify. Period.

I’m Black mixed with Black and I’ve had my loyalty to the cause questioned because of traits I had nothing to do with. I can’t help a privilege, but I can surely acknowledge it and let you know that I’m uninterested. I can earn everything I get. If you are going to give me anything, let it be because I have done something to earn it outright. I am uninterested in your bias against folks that look like my Father, my Grandfather, my beautiful Aunts and cousins who just happen to be on the deeper end of the complexion spectrum because we span from milk to coffee and every latte and macchiato in between. But if I’m given anything because of my genetics, trust that I’m sharing it across complexion lines, and using it to put myself in a position where I can combat the very thing that got me in the position.

I got Black ass art on the walls. Black ass books in my library. Black ass records and songs in my Tidal playlists, cuz I support Black folks with Jackson Five nostrils who marry beautiful Black Queens and have kinky haired babies who go out with their fro out. I quote Amanda Seales, Issa Rae, Killer Mike, and Soulja Boy cuz they by culture and for the culture. I’m bad and I’m bougie. I like beauty supply earrings and authentic Gucci bags. I only shop at markets but I listen to trap music on the way. I’m looking for a trap Pilates or trap boxing class if you hear of any… and I like my men educated, Black, hairy, with a grey jogging pants and Timbs section in their closet next to the suits, and non-hotepian. I have a Black man and a Black son, who I support and love without fail or question. I’m smart, educated, dope af, and Black as hell!

So judge me and everyone else who is Black with that in mind. You don’t know my story, his, or hers. If I told you:

-I almost died because being Black and female and pregnant isn’t taken as seriously because we had babies in fields and huts and shucked corn through labor. I was Black enough to be ignored.

-I have been discriminated against because I’m Black, female, a Black female, and an educated Black female. I was Black enough to the racists.

-I carried a Black male baby while carrying a Black man, and my back still hurts from it. I was Black enough to support Black men inside and outside.

-I have been cheated on, lied to and lied on, wrongfully accused, stolen from, harassed, threatened, and assaulted by Black folks. I was Black enough to be mistreated by my own.

-I buy Black with intention.

-I speak up for Black people and Black women in ways I don’t broadcast, beyond my Facebook rants, that have harmed me personally but I still carry on because it’s necessary.

… would you discredit me because I don’t look like what you think that woman looks like? Trust me, I know where my own loyalty lies, and if you let other people and your assumptions tell you who I am, I guarantee you’d be wrong. This is just my story, but we all have one. And all of us, whether we acknowledge it or not, have been Black enough at some point to feel the pride of being Black and experience the pain of being Black.

This Black ratings scale, are you Black enough trash is hotep shit at its worst. Black attempts at supremacy is rancid poison, and a by product of White male supremacy that some Black folks have accepted to feel superior in a world where we lack power. Hoteps, both male and female, have latched on to supporting Black folks who belong under the jail, then criticize anyone who isn’t in blind support of every wrong Negro man, especially those who wrong Black women. I proudly despise any attempt to lessen who Black women are in the name of patriarchy, of any race of men, Black men in particular. All that hotep shit will get you cussed out and deuced really quick. Thou shalt not pull your dick out, be a Nazi, or be a hotep. Those three things apply to hotep high priestesses as well… no amount of sage, crystals, and head wraps will save you from being called out. The rest of us are tired of you and want to call the delegation to order every time you rear your ugly head to oust you from the kingdom. Just call me Jon Snow… I cut folks off at the neck clean. Besides, Winter is coming (well this week it arrived) my tan has worn off, I’m back to my original color, and I gotta fight off the Night walkers and shit who dare challenge me my Blackness. I ain’t a killer but…

-Signed, everyone Black person ever labeled, questioned, or assumed to be low to non-existent on the “Black enough” scale.