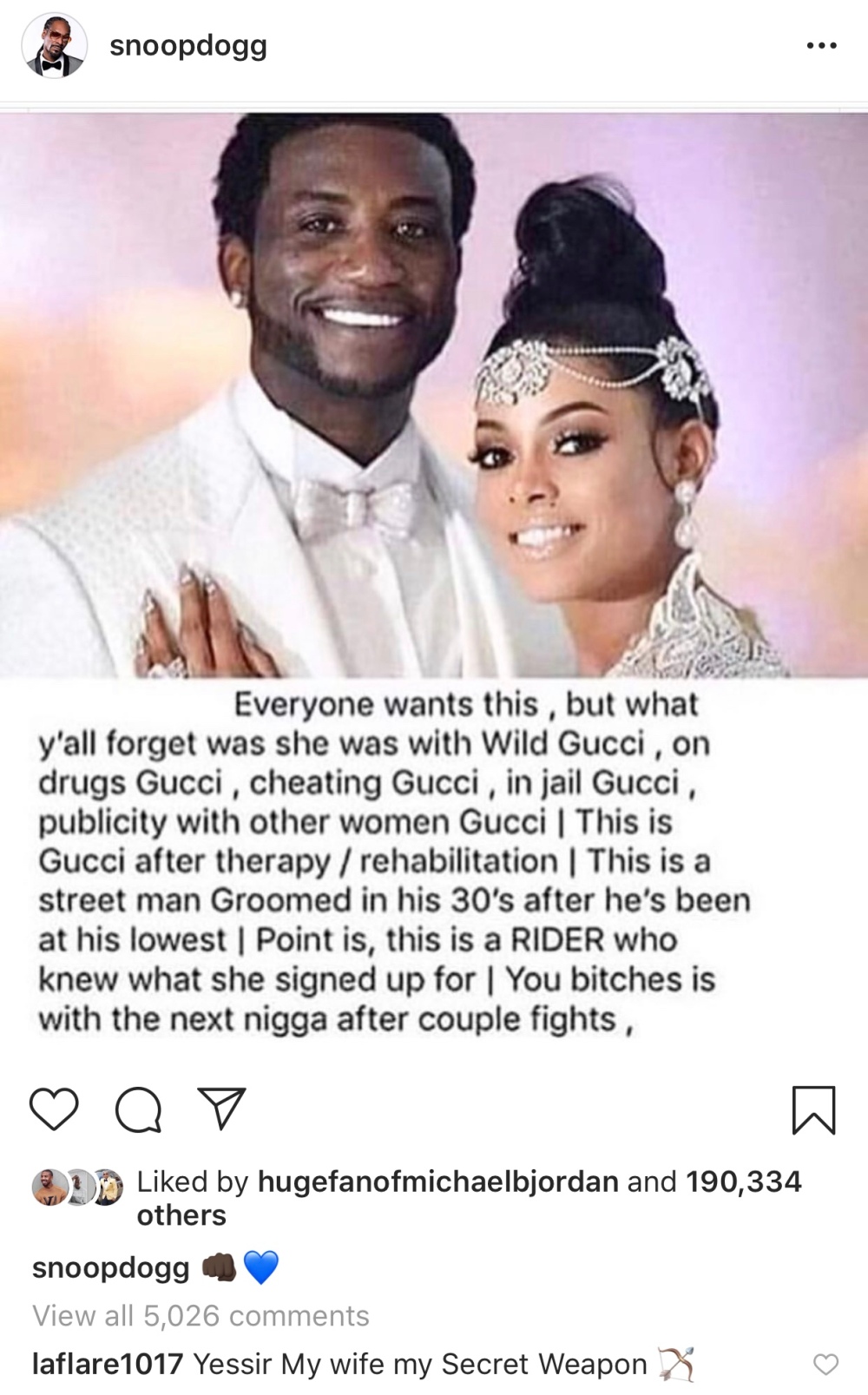 So I see this tomfoolishness on Instagram, and I’m triggered. Not because this is my life, I care about either of these people, or this somehow relates to me… but because it’s the DUMBEST shit ever! Snoop should stick to rapping, that show he has with Martha Stewart, and wearing fucked up hairstyles. He’s good at those things. He should stop trying to promote healthy relationships. This the same negro who was married but walking around with two hoes in dog collars and chains.

Beyond that… this is all one big HELL NO!
I don’t know who came up with the term ride or die, but clearly it was a wack ass dude who felt like his woman should be willing to suffer to be beside him. She should want to die rather than walk away from him. He would call her strong, his Queen, his secret weapon in exchange for her blind loyalty.

If the only two choices are riding and dying, I wanna sit this one out. Shit sounds like a set-up.
…
“Ride or die chick fighting insecurities, want a ring and my last name for securities.” -J. Cole Sparks Will Fly

-Women should aspire to be wives.
-Men should aspire to be wealthy and have many women, including a wife to bear his children and/or groom him into a man.
-Women are told to be virtuous and pure while men are praised for sowing their wild oats.
-Men run things while women are in the background, taking their notes or making their coffee.
-Women are expected to be whatever her man needs, and men are expected, to just be men.
-Women who comply , or who ride or die, will receive the spoils.

Those messages are not just floating out in space. They have become a major part of the American code. These messages are reinforced in our homes, in church, in school, on television. They often result in women making choices that aren’t based in reality but in some false social construct.

Some women exchange a ring for their respect, honor, and dignity. They are asked to be less of themselves for the comfort of that man and comply just to be married. Other women stay in relationships that are wildly toxic in order not to be alone… and that toxicity can be everything from emotional abuse to physical violence. Still others give up their own dreams and desires to support a man, who will never return the support, leaving her vulnerable to his whims because she’s given up her independence. All are riding, and all dying a little bit, emotionally for sure.

So we have couples like Gucci and Keyshia. I mean of all the people and relationships to promote, this is what we are doing?!?

Dude had (still has) a huge ice cream cone tattooed on his face, a lean induced beer belly, and he was ashy as hell all the time. He meets her. Then he goes to jail and spends the bulk of their relationship there. She stays with him, despite his continued problems with the law, drug use, and according to the meme, cheating. She matured him, groomed him, and supported him. This is the ashy, drug addict cheater with dairy products inked permanently on his face that she sacrificed parts of herself for. Articles call her the living example of love being patient and kind. But who was being kind to her? She certainly wasn’t being kind to herself.

Why are women expected to put up with a man’s disrespect and dishonor for the hope they’ll one day get the best of him? Why was she not worthy of the best of him from jump!?!? She may be a rider, but did she die? Maybe a little. A woman should not have to suffer to be besides her mate. She should never have to sacrifice to the point of emotional distress. She should have bigger ambitions than being just some man’s comeuppance. Always the prize, but never the winner.

“She was with wild Gucci, on drugs Gucci, cheating Gucci, in jail Gucci”

Yeah but WHY? She already was successful. She was an urban model, in videos, and had a successful beauty business when they met and started dating. He was ashy af. But somehow she decided to give him a chance… now we’ve seen it time and time again. These dudes who look like struggle and a lifetime of regrets end up with attractive women… because they are wealthy men. She was successful but she didn’t have a rapper’s wife lifestyle. So perhaps, and most likely that’s why she endured these betrayals. Money often inspires blind devotion. That blind devotion requires giving more of yourself that you can ever hope to receive in return. There is no price on self worth!

He should have healed himself before he involved her and her children in his toxic lifestyle. Here is where the difference between a healed and unhealed person becomes evident… the healed individual will walk you around their shit, so you see it but you aren’t made responsible for it. Unhealed people want you to sit in their stink so you can take it on as yours and feel obligated to help them through it. He allegedly gave her two million to hold while he was in jail, where do you think she was going? Nowhere. But she was certainly double boiling in his bullshit!

So we already talked about her riding.., she’s in an unmanned car being driven into oblivion. Where tf is she going? But you are damn right I might be with the next one… now it would take more than a couple of fights, but if women are expected to put up with a man who is immature, addicted, in jail, inconsistent, and unfaithful, then call me uninterested. I’m not riding to my death. Period.

Nah fam. Everyone does not. I can wear white to a house party. I can put on a pearl headband to go to the grocery store. Give me a man with millions and you can be sure I won’t waste a dime of it having some elaborate party for television, to show people why I ride so hard for dude. But I won’t be playing Build-A-Man… especially with an ashy dude with 31 Flavors on his face that can’t stay out of jail or other women as my base. I’m sure she has finally gotten the best of him, but at what cost?

I don’t know about you, but I’ve been a rider all of my life. But I’ve also died a little in my spirit dealing with people who were just passengers while I drove us to the finish line. I’ve resurrected those parts of myself. At this point, no other human gets to dictate my path, so I’m no longer just riding. Beyond that, if we lose, we losing together and if we win, we’re winning together. So move over, I’m driving too… you do some riding. But no dying happens on my watch. I got ambitions.

“…now you got me right besides ya. Hoping you listen, I catch you paying attention to my ambitions as a rider“-Tupac Ambitionz as a Ridah