Sooooo I had to read up in Cynthia Erivo. I knew she played Celie in The Color Purple on stage, but I had no idea about her otherwise. My decision to not see Harriet was not based on her being selected to play her… I just really don’t want to see a film adaption of Harriet Tubman. I really have no desire to be entertained by some biographical depiction of her life that takes artistic license with the truth. That’s a personal decision that I stand by. However, after I read about the choice for the lead role… I knew I made the right decision. No shade to anyone who saw it and loved it… but frankly, you can’t be anti-Black (read Black American) and expect me to rock with you at all.

Ethnicism … I don’t know if this is a real word, but I’m using it. It’s no different than colorism, this idea that ones ethnicity makes them higher on the importance scale than another, even intraracially. It’s an -ism that really burns my buttons and is most seen between us of African-American heritage and first-generation Africans living in America. While what we share is great, the divide between us is equally as great.

I work in immigration, so I see a lot where this dichotomy is concerned. I am also Black… not just Black in terms of a skin color but in terms of social category, race. So my understand if this isn’t just rooted in my personal, but in my professional experience as well.

Race has its beginning in the 17th century by Carl Linnaeus, but it wasn’t until 1830 when American anthropologist Samuel Morton, in the study of cranium size deduced that people with the same basic physical traits often shared cranium sizes. From this came the idea that those of African descendent had smaller brains than Indians/Asians who had smaller brains than Caucasians. Race, as it is currently used, is mainly an American system of labeling used to justify slavery and oppression. While anyone African would fit into the Black category, the primary group looked at to determine what that means and looks like is African-Americans. I’m Black like that!

My experience is that of an urban Black woman in America. I code-switch often, I can speak the Queen’s English and African American Vernacular English. I call out racism and colorism, and to give you a really good idea of this ethnicism I despise… I’m going to call that shit out too. But to kind of hone in on it, Im gonna have a muse, or two. And yes … I’m judging tf outta you!

I know y’all love some Luvvie Ajayi, and I thought she said a few funnies and what not. But then I saw some of her foolishness exposed, and realized she is a full on cultural harlot…casually romping with the Black American cultural experience for her monetary and professional gain… then simultaneously reducing it. She has gotten wayyyy too comfortable making negative and inappropriate references to ideas and events that are the specific experience of African-Americans and our direct ancestors. She showed that she thought the red, black, and green her family left by choice made her somehow an authority on the Stars and Stripes we inherited by force. I can show you better than I can tell you:

Joking about forcing sterilization, a real experience of Black people in America, is NOT wassup.

Yet she loved Homecoming by Beyoncé… go figure.

So in 2017 she made a Facebook comment about what she labeled “fauxtivists” and her post “I’m Judging You” book popularity seemed to take a hard hit, delivering her back to her harlot ways. In particular this part of the comment was trés wild: 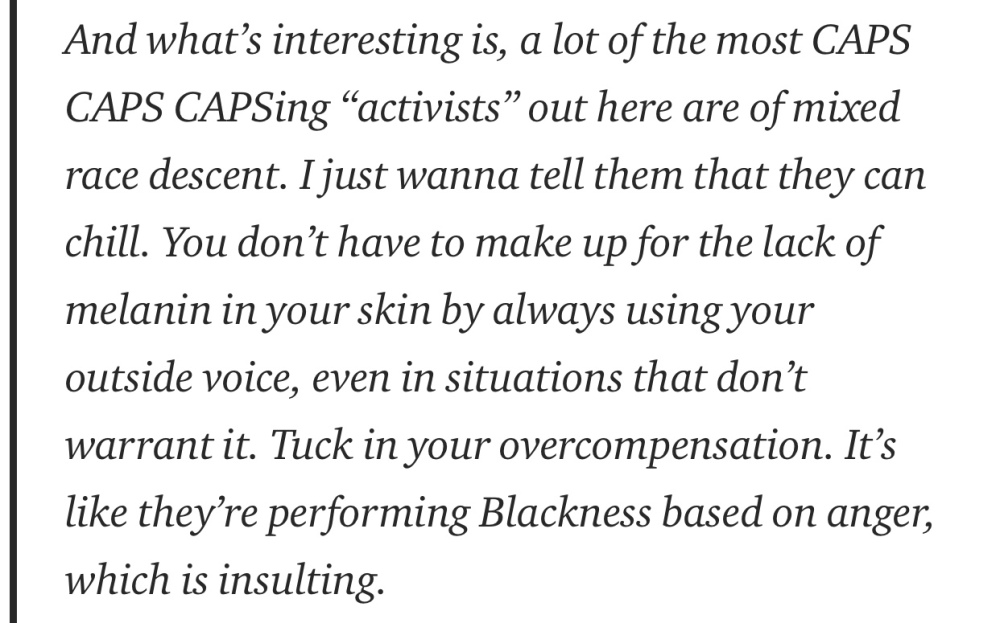 Wowwwwwww… so we are going to call out mixed race activists for being too active? And since when does a lack of melanin in your skin make you mixed race? There are lots of mixed race Black people darker than me and both of my parents are fist Afro pick Black! But she continued until she got dragged for filth when she showed her lack of knowledge about Black American culture and our deep affection for lil Tevin Campbell…

Tevin can sang. Be clear.

Now surely she likely said some great things about Black people, Black women, American or African… but what I know to be true is that these types of insensitive and judgmental comments about a culture that has invited you in to participate is a slap in the face. It’s the issue many African-Americans take with Africans in America… this sense of being both separate when it benefits them but yet equal enough to take these culturally fucked up shots.

It’s not okay. Like her if you want… but from me, she can get the bozacks. For the non urban, hip hop, Black culturalists, that’s “deez nuts”, the sack, the testicles.

And her friend, Cynthia Erivo can share with her. A bit of Internet sleuthing and it wasn’t hard to find that she too is a cultural harlot. She is playing one of the the most central and heroic figures in our history as Black people in America, but yet she’s quite confused about what and who we are. 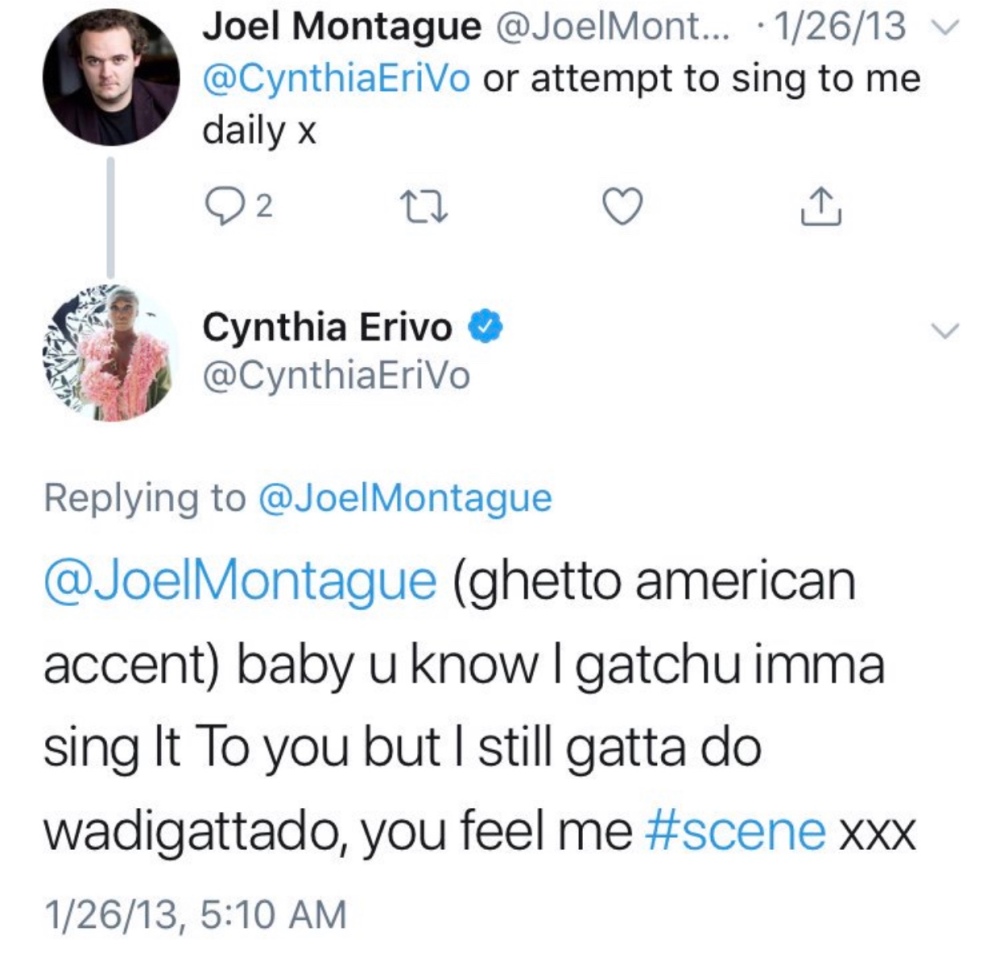 You lost me at ghetto American accent yo.

And this display of a clear inability to shut up and not speak on a clearly experience driven response that is outside of your realm of understanding… is just par for the course. Both she and her Naija (read : Nigerian) sista Luvvie need to pick a chair and sit their asses down in them. Dubya doesn’t bother me, but I can certainly understand a person who lived in Louisiana at the time of Hurricane Katrina having a reaction to his praise. Her tone deaf and experience lacking response was unnecessary. I mean…

I won’t bore you with the particulars but she wavers between wanting to be included in the culture and then seen as separate at the same time, pitting Black British against African Americans, and speaking particularly about the English accent. I find particularly disturbing her call out of “ghetto American accent” and her pride in her “English accent” as if somehow the properness of the English accent is juxtaposed against what she calls “ghetto American” which is really a combination of AAVE and a Southern accent. We all know her use of ghetto means uneducated, ignorant, poor, urban, etc.. And then to make these mockeries in response to a White man, on social media. NOT okay lady. Harriet would not approve.

But hey, it looks like she and her homegirl aren’t exactly as for the culture as they claim either… cuz lets be real real clear here: the culture we are speaking about is an African-American centered culture that welcomes allies but also is clear about calling out oppression and anyone who dismisses it. So forgive me if I’m not on the Luvvie/Erivo train… cuz they can miss me with that bullshit. The culture you profit from is Black American culture primarily… and around these parts we don’t take too kindly to racism, colorism, sexism, ethnicism, classism, or whatever other oppressive systems you bring with you. Leave that shit behind.

And as for Harriet, she surely didn’t take too kindly to this cultural train jumping on her railroad… you wit me or not?